We are all dependent on others and that involves shopping, which may be no more complicated than shopping for groceries, or may be as fraught with risk as shopping for a trusted adviser.  Grocery shopping is relatively convenient because it is a progressive industry in which reputable brands and price competive supermarkets have supplanted the Mom and Pop cottage industry of the past.  Grocery shopping is relative safe because it is a regulated industry in which safe food standards assure us -- for the most part -- that what we buy is fit for human consumptions.

This convenience and safety is not as strong in the services -- including advisers and other purveyors of senior services and senior-oriented housing -- to which we turn as we age.  One of the unexpected challenges of aging is that we have to become better shoppers just at an age in which we want less stress and more time for the joys of living. This is complicated and may try the patience of some people.

The prevailing view in our society is “buyer beware,” meaning that the onus is on the buyer to make a good deal. Our laws don’t protect consumers who make a bad deal when everything is otherwise legal. This is a significant factor for senior housing transactions which may not be what they at first appear to be.

Related is the doctrine that all adults are bound by the deals they make unless they are found to have legal incompetence, in which case the handling of their affairs are assigned by the courts to a guardian. This is a high hurdle. It takes a court decree to take responsibility for poor judgment away from an adult, even at a very advanced age, which is as it should be. That means, though, that some people who experience age-related diminished discernment, and who become gullible, may be subject to legally authorized, but morally reprehensible financial exploitation.

It’s important for older people, and those who love and support them, to become good consumers as age brings on a growing dependence on services from others.

Tips for Consumers (And for The Businesses That Serve Them)

We suggest here some pointers to help make you a better consumer. It also helps, though, to understand maxims for businesses as well. That way you can assess whether a business you are considering has forward-thinking, commonsense management or is just run like a conventional business school case study.

• Marketing and salespeople play to perception.

• The reality is often very different from the perception and appearances.

• It’s important to listen but to verify.

• Discernment can be problematic for more complex purchases so it’s best to deal only with purveyors who are known to be trustworthy.

Business: Practical Adages… Some are for consumers; some for those who serve consumers.

• Make those who buy happier than those who didn’t.

• Instead of investing in selling a bad product, change it to a good product and people will buy it.

• You can’t manage what you don’t measure.

• Management needs a dashboard of all business activity; GAAP accounting can be derived from management accounting but GAAP is too limiting to be a good guide for managing.

• Managers aren’t hired to be nice or popular; they’re hired to get things done and to meet customer expectations and beyond.

• Businesses can choose to cooperate or compete; when they compete with their customers, no one wins.

• In building and equipment maintenance, what you miss now is a bigger job later.

• You snooze, you lose. To act and to learn from errors is preferable, and higher risk, than is passive avoidance of responsibility.

Business: Practical Adages… Some are for consumers; some for those who serve consumers.

• Those who are paid on a time basis -- whether it's by the hour, by the month, or by the year -- have no pecuniary incentive toward achievement and high productivity.

• The best businesses are harsher self-critics than any outside critic could ever be; positive spin is for the publicity folks

• Complaining customers are the best advisors; even the harshest critics can be won if the business is open to constructive change rather than enforcement of hierarchical power and control

• Top tier businesses have a fluidity that rewards competency, ability, and vision.

• Process is not action and meetings are not achievement. The best businesses get things done and change continuously to improve customer value.

• Organizations perform better when they obsess on customers in preference to greed.

• A business cannot operate without a customer; customers look for value and for high minded ethics.

The Five Deadly Diseases Eating Away at Business Excellence

In this classic from 1984, W. Edwards Deming, the master of quality and scientific management describes false thinking in American business,.. false thinking which still persists into the 21st Century.

Business: A Deep Dive for those who want more

Does the legal form of an organization matter?

Services needed by those who are aging are provided by government, nonprofit enterprises, and for-profit businesses. Each form of provider has its own unique characteristics.

Government provides an increasing array of services as people age, since age correlates with the need for services. Some government services are supported from general revenues while others require fees. 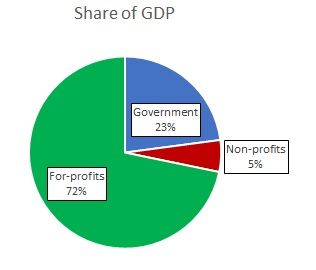 Beyond government, there are many free enterprise businesses – nonprofit or for-profit – ranging from savings banks to advisers to senior housing corporations. They seek to serve people who are thinking of retirement, or who are retired and healthy, or who have reached advanced age and want the security of standby assistance.

Some businesses operate as nonprofits – which doesn’t necessarily mean that they’re not profitable – while others are conventional, taxpaying, investor funded, for-profit enterprises. Selecting from these many options can be confusing. It can even be confusing – perhaps, it’s particularly confusing – to try to access government enterprises. How many people, for instance, are familiar with the dime deduction program in Social Security? [Click on this sentence for more on dime deductions.]

All three – government, nonprofit organizations, and for-profit enterprise – comprise financial, moral, and performance elements. “Performance” here refers to the efficiency by which they deliver services, i.e. the value of the service relative to its cost. “Financial” refers to the sources and uses of money resources since money is a measure of the productive capacity of society. “Moral” refers to the ethical and character commitments of those employed.

All three need capital to function. That capital comes from ordinary citizens who invest through retirement plans, mutual funds, or directly. There are vast differences, though, in the accountability that follows from the funding each kind of organization depends on.

Government. The imposition of taxes is limited by the willingness of Congress to impose taxes and the willingness of the People to pay them. Government borrowing is limited only by the willingness of investors (including foreign governments) to invest in U. S. Treasury debt. Increasing debt can be offset by decreasing value of the currency since most debt is denominated in U. S. dollars. A limit is reached when the interest on the debt becomes so great a percentage of GDP that the economy collapses under the burden of it. 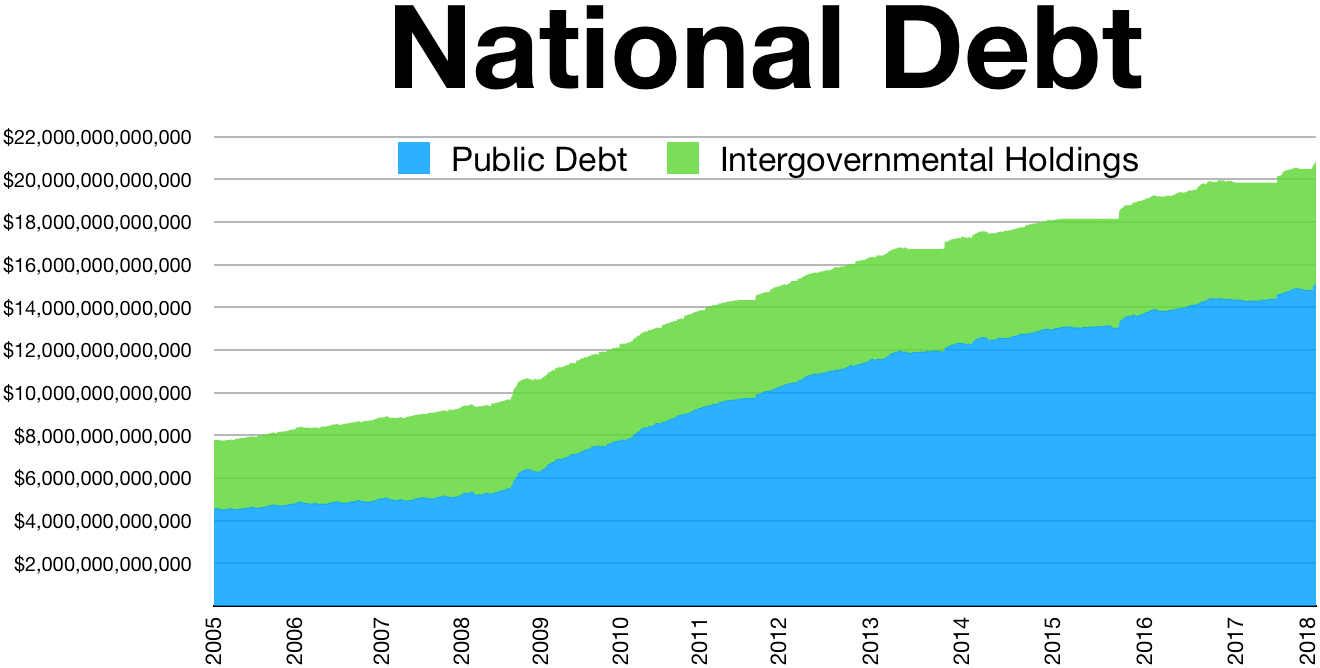 Nonprofits. What we think of true nonprofits – acknowledged public charities – depend on philanthropic donations to cover their costs. The expenditure of revenues is under the control of the executives and the board of directors (or governors or trustees, which are interchangeable terms). There is no explicit accountability of the philanthropic organization to the donors other than the reality that a reputation for impecunious use of funds may put a chill on further donations.

Accountability is somewhat less direct for publicly-traded enterprises. They are regulated by the Security and Exchange Commission and are required to disclose all material developments. That is not true for most government actions, nonprofits, and for closely held enterprises. Two cautions affect accountability:

1. The Federal Government has Sovereign Immunity, which means that it cannot be called to account judicially unless accountability is specifically authorized. Moreover, the appropriately infrequent accountability of elections means that accountability for minor acts of public trust can go unnoticed.

2. Many contracts, which seem like investments – insurance policies, annuity contracts, entrance fee continuing care contracts – do not have security protections and should only be accepted with great caution.

Business Form Does Not Equate With Business Ethics

It’s tempting to attach moral qualities to the form of business organization. But, form is not substance. Discerning consumers need to dig more deeply.

Nonprofits. Many people view nonprofit organizations as more ethical and trustworthy than are others. In truth, many nonprofits are charitable but, then, many for-profits also do charitable acts. It’s tempting to view the charitable acts of for-profits cynically as something manipulatively self-serving. But, then, when we consider the many profitable tax-exempt organizations – hospitals, senior housing, universities, even churches – we have to ask ourselves whether it is cynically self-serving for entities that can afford to pay taxes to claim tax exemptions and to avoid paying their fair share of the communal tax burden.

Government. In times of trouble, we turn to government for solutions. Government has privileges that other organizations do not. Government can use coercion – including the sanctions of fines, imprisonment, and more – to enforce its will. Moreover, government is allowed to (and does) form monopoly organizations, which are often unregulated other than by a loose accountability of elected representatives to the electorate. Government can be effective, even necessary, in time of war. Still, its privileges may make other kinds of organizations – nonprofits and for-profits – more accountable to those dependent on services than is government. It can be frustrating to rely on government for quick, efficient solutions.

For-profits. There are some businesses which are predatory. A developer may build shoddy houses and foist them off on first time home buyers who think someone is looking out for them as they pursue the American Dream. It can be a shock to find that a home is not what it appeared to be, while the development corporation that built and sold the homes is no longer in business. Thus, it’s not surprising that many members of the general public equate private enterprise with greed and exploitation.

Still, most businesses are operating entities. They can’t afford the here today and gone tomorrow business ethics of the unscrupulous. They seek to be contributing members of the community helping people live fulfilling lives with services they need. Your local merchants are here to stay, and they value their reputation. They seek to serve and not to gouge.

It’s important for consumer shoppers – especially those who are aging – to be able to discern the difference between those who exploit for gain and those who serve their customers and hope for a fair return and a fair living. The for-profits finance their own businesses, and don’t depend on customers or donors to provide their at-risk ownership capital. They depend on their reputation and their good will as pillars for their business. The result can be that they may provide better value for consumers, with fewer strings attached, than either the nonprofits or the government. I

It’s best for consumers not to judge enterprises by their form of organization but by their record for service and customer value.

What does this mean for you?

The strength of our system is that there are ample incentives for businesses to evolve to meet the needs of the people and to do so with growing efficiency and improving customer satisfaction. Still, there are many enterprises that a less effective at these goals of value and satisfaction, so it requires a discerning consumer to make the best choices.

The prevailing truism is that an educated consumer is a better consumer. Otherwise, consumers may be enticed into buying the sizzle and not getting the steak. Our goal is to help you and those you trust to become better consumers on your behalf.